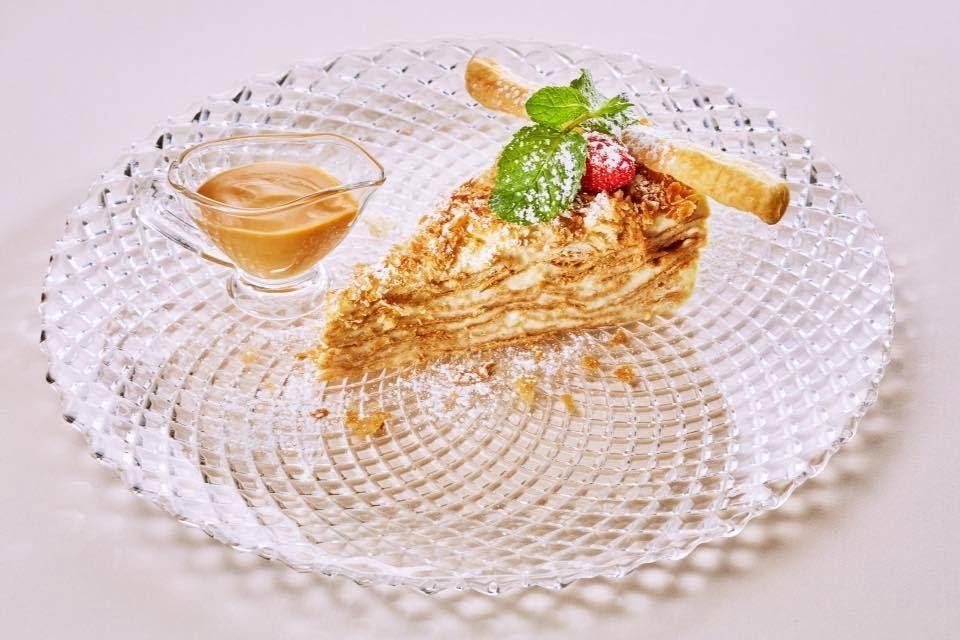 A cake Napoleon is a branded dessert of the Valentino restaurant

The origin of this culinary masterpiece is noble, but very vague. It is considered a French dish, but its roots go back to Italian Naples, where mille-feuille was a favorite dish of local cuisine. But in the Italian version, it consisted of spinach, cheese and pesto sauce. And the name “Napoleon” comes from the name of the Italian city.

In the book “French Chef” (Le Cuisinier françois, 1651), the famous French chef and writer Francois Pierre de La Varenne one of the oldest recipes of this cake is described.

According to one version, the recipe for this cake was created during the Second French Empire (1852-1870). Almost by order of Emperor Napoleon III in honor of his uncle, Napoleon Bonaparte. It seems to be true – mille-feuille cake has really been made since then. But in the French version, this dish consisted of puff pastry.

There are many varieties of mille-feuille. Today, not just in every country, but even in every restaurant – its own brand recipe, and Valentino restaurant is not an exclusion. The classic mille-feuille for chefs and gourmets is, first of all, a gentle dessert. Its variations multiply every year. An important component of this cake is puff pastry. Its taste should not dominate and interfere while tasting the dessert. The dough is only designed to slightly complement the unique taste. The canonical mille-feuille is prepared so that it literally melts in your mouth. The culinary secret of a gastronomic masterpiece is custard, which is mixed with pre-whipped cream. Before sending it to the oven, lightly sprinkle it with powdered sugar to create a subtle sheen and caramel aftertaste. We, especially for this dessert, cook caramel by ourselves, which in combination with the cake will definitely give an incredible taste!

In the morning from 08:00 to 23:00 every day in the restaurant “Valentino” you have the opportunity to enjoy the popular dessert – cake “Napoleon”.